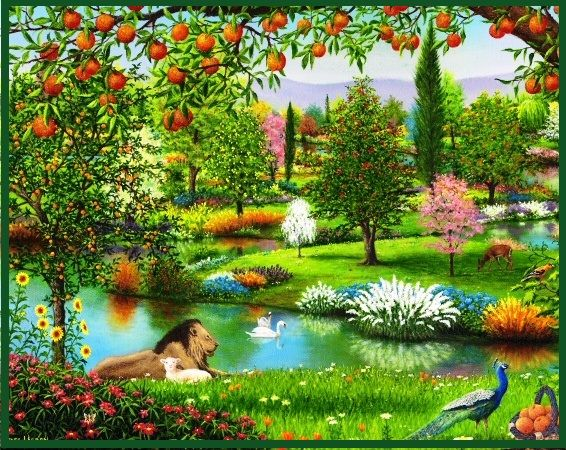 Garden of Eden – Created For Mankind

The Garden of Eden is described in Genesis, Chapters 2 and 3. The Lord created the Garden specifically for Adam, the first man, whom God had formed. In Genesis 2:8-9, we read: “The LORD God planted a garden eastward in Eden, and there He put the man whom He had formed. And out of the ground the LORD God made every tree grow that is pleasant to the sight and good for food.” Some believe the Garden was atop a mountain, or perhaps it was an outlet for freshwater springs, because we read, “a river went out of Eden to water the garden, and from there it parted and became four riverheads” (Genesis 2:10).

Thus, the Garden of Eden was perfect. It offered both beauty and sustenance, being home to every tree “that is pleasant to the sight and good for food, ” and a source of freshwater from the river to drink. As for man, God “put him in the garden of Eden to tend and keep it ” (Genesis 2:15).

Garden of Eden – A Biblical Contradiction?

The Garden of Eden, as described in the Genesis account, is often cited by critics as an apparent Bible contradiction. Critics compare the “creation week” in Genesis Chapter 1 (the creation of plants on Day 3 and animals and man on Days 5 & 6), with the creation of the Garden of Eden in Genesis Chapter 2 (the garden was created for man after man had already been brought forth by God). We read, “Thus the heavens and the earth, and all the host of them, were finished. And on the seventh day God ended His work which He had done, and He rested on the seventh day from all His work which He had done. Then God blessed the seventh day and sanctified it, because in it He rested from all His work which God had created and made. This is the history of the heavens and the earth when they were created, in the day that the LORD God made the earth and the heavens, before any plant of the field was in the earth and before any herb of the field had grown. For the LORD God had not caused it to rain on the earth, and there was no man to till the ground” (Genesis 2:1-5).

Critics point out that Genesis 1 declares that plants were created on Day 3, while man was created on Day 6. Why then, do we read in Genesis 2 that there were no plants because man had not yet been formed? The key is to read Genesis 1 and Genesis 2 in context. Genesis 2:1-4 ends the “creation week,” while Genesis 2:5 begins the Garden of Eden account. This is clear by the entire context of Genesis Chapter 2, and the fact that the Garden had not yet been established. He hadn’t yet created man who was to “tend and keep it” (Genesis 2:15). In the Garden of Eden, planted by God for man, we read that God created every animal from the dust of the ground and brought them to Adam to name. Critics cite this as a contradiction, because we read that God created animals on Days 5 and 6 of Creation Week (before the garden was planted by God). This apparent contradiction is easy to explain. God created the world and all of the animals therein. Then He created man. Then He brought one of each animal in front of man for the purpose of man’s naming each animal (and probably to show man that God had indeed created the animals, as man had been formed after the animals and did not bear witness to their creation). “And whatever Adam called each living creature, that was its name” (Genesis 2:19). It is poor hermeneutics (biblical interpretation) to read two separate accounts (the creation of the earth as a biosphere in Genesis 1 and the creation of a single garden and the happenings therein in Genesis 2) and then cite the differences in the two accounts as contradictory.